Zoe and Sarah’s perfect wedding was a day surrounded by their favourite people having fun. Zoe shares their story. Photographs by Max Callender

We met online, on GayDar Girls, in August 2011. We started chatting and soon swapped numbers, and then we were texting each other day and night.

Sarah lived in Nottingham but had family in the Birmingham area, where I lived at the time, so we arranged to meet a couple of times at local bars and restaurants – but our plans always fell through because I wasn’t very well. I had recently been discharged from hospital and was on my way to being diagnosed with MS. I had suffered a relapse which left me unable to use my right side and I was admitted to the stroke ward of my local hospital for treatment. I was a little in denial, but every movement was extremely hard and tiring and in the end I had to admit I wasn’t well enough to go on a ‘normal’ date. 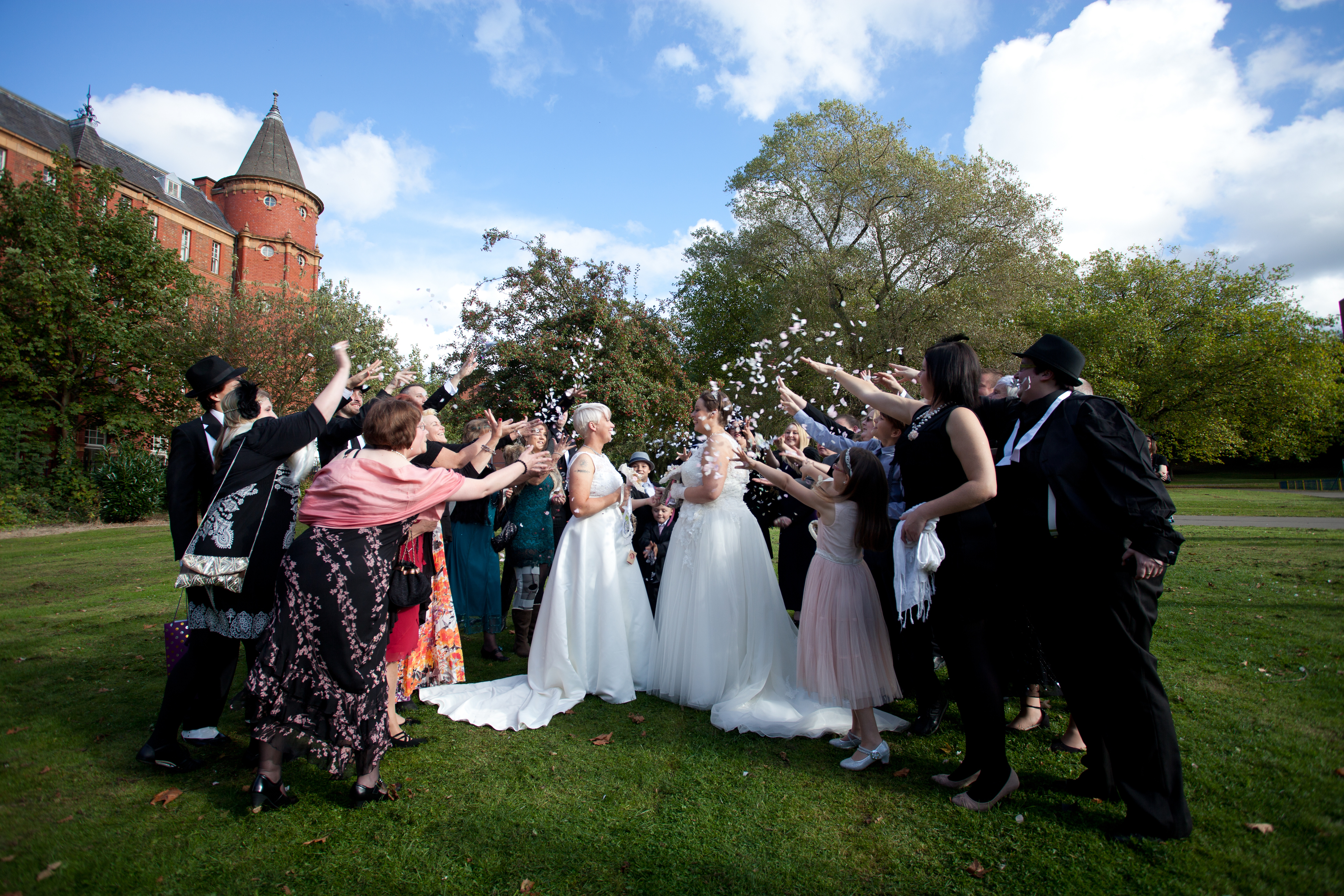 I was open and honest with Sarah about being ill from the start and she was extremely understanding. When I admitted to her that I didn’t feel well enough to meet in town and go drinking or dancing I invited her to join me for coffee one day in my flat as that’s all I felt up to. Assuming I was a serial killer trying to lure in fresh victims, Sarah politely declined, but she asked if she could add me on Facebook.

After looking through all of my photos and deciding psychopaths don’t have Facebook accounts, Sarah decided to take the risk and join me for coffee, but she brought her 18-month-old springer spaniel, Bertie, with her for security. The three of us have been inseparable ever since.

Sarah proposed to me on the anniversary of our first ‘date’. She schemed with some of my closest friends and planned a romantic day of pampering for me, which culminated in her going down on one knee at home to present me with a beautiful diamond ring. I had no idea she was planning to propose and was so overwhelmed and happy I just hugged her as tight as I could.

I didn’t realise at the time that Sarah was really anxious that I hadn’t actually said the word ‘yes’. In my defence, I had thought the hug and the kiss and the tears of joy implied it! Sarah’s proposal was particularly romantic as she had factored in my OCD about numbers and anniversaries – our first date, proposal and wedding are all celebrated on the same day. A year after she proposed to me I got down on one knee and presented Sarah with her own engagement ring. Despite the fact the venue was already booked and she had bought her dress, I was still worried she’d say no! Sarah had wanted to do her proposal somewhere in public but she knew I’d say no just to be funny.

We tried to make our day as much about us as we could. The music choices were eclectic but we wanted to include our favourite songs – and it worked on the day! We both walked down the aisle to Sunshine On My Shoulders by John Denver and returned up the aisle as Mrs and Mrs to Zip-a-Dee-Doo-Dah.

We’re quite a down-to-earth couple and aren’t very materialistic or showy, and we just wanted a day surrounded by our favourite people having fun. We knew we wanted the ceremony, reception and evening do all in the same venue and we both decided a hotel would be the perfect location. This would enable family and friends to stay and would also provide me with a room that I could use throughout the day so that I could rest when needed.

Sfor some stunning pictures. On our way back to the hotel I was walking behind my cousin’s children Kerr, aged nine and Beau, aged four, and heard the best line from the whole day. Kerr was explaining to Beau that in the evening there would be more guests arriving for the disco and that some of the men would be dressed as women and some of the women would be dressed as men. Beau’s response was that that would be awesome! 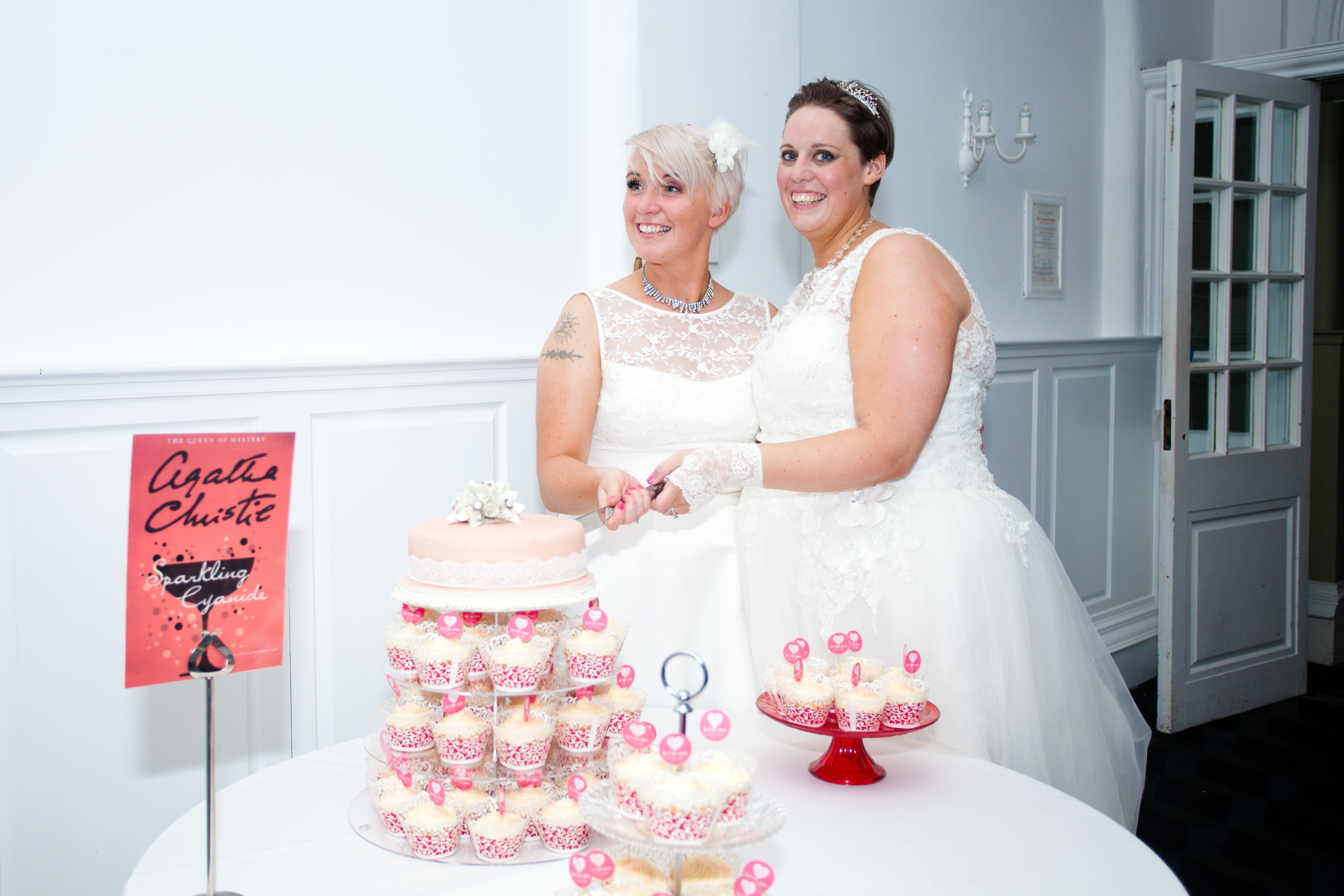 Our advice on planning your wedding would be to not try and please your families or your guests – just plan it how you want it. There will always be someone who complains they’d rather have had something else to eat or that the chairs were uncomfortable or that cousin Muriel had sky diving at her wedding and it was so much better, but those few opinions don’t matter. All that matters is that you enjoy your special day the way you want to do it.

Everything really does go quickly; you’ll blink and it will be over. Why not ask someone to film the day – it doesn’t have to be a professional video, but it’s so nice to be able to look back at the ceremony and speeches. There’s so much that you miss on the day because it’s so busy.

Everybody told us they had a wonderful time – the whole day was filled with love and laughter. It really was the perfect start to our married life.

For more, read the latest issue of Pink Weddings Magazine