If you’ve thought about getting married in Las Vegas, you’re probably picturing a kitschy ceremony performed by Elvis wearing a flashy jumpsuit. (And you’ve probably wondered if you had the cheek for it.) In the most spectacular wedding entrance your imagination has ever produced, The King drives you right into the chapel and down the aisle in a vintage pink Cadillac convertible. Once the fog clears and the excitement dies down, Elvis blesses your union, curls his lip and croons a few of his iconic songs. Pure Vegas glitz.

Ron Decar, owner of the Viva Las Vegas Wedding Chapel, proudly confirms that this is actually one of the establishment’s incredible offerings. ‘Yes, we do that here,’ he says. ‘But with all the other themed wedding ceremonies we do – all including theatrical lights and smoke effects – our Elvis wedding packages sometimes seem tame by comparison.’

Want to be married by Dracula, stepping out of a coffin to perform your rites in a graveyard setting, surrounded by flying vampires? Or maybe you’ve you dreamed of exchanging wedding vows with James Bond, Darth Vader, Liberace or Alice Cooper as ‘minister.’ If that’s not your taste, how about being carried down the aisle on Cleopatra’s throne by hunky, exotic Egyptians? At Viva Las Vegas Weddings, it’s a routine part of Ron Decar’s wildly creative wedding business.

Las Vegas has a reputation that suggests to visitors ‘anything goes’. That’s certainly always been true at Viva Las Vegas Weddings – with one notable exception. Until same-sex marriage was legalised in Nevada (and now across the entire United States), the motto ‘what happens in Vegas stays in Vegas’ held true for same-sex weddings as well. Before that time, the chapel could offer only non-legal commitment ceremonies to gay couples. Apparently, anything could happen back then except a legal same-sex wedding.

Nevertheless, chapel proprietors Ron Decar and Jamie Richards have always welcomed any couple who wanted a ceremony, legal or otherwise, to bind their lives together in love. In fact, it was the first chapel in Las Vegas to offer commitment ceremonies. Sixteen years later, Ron and Jamie are thrilled about their country’s evolution on the issue of marriage equality. Today, every marriage ceremony can be performed legally at their chapel. 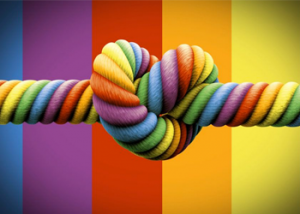 ‘Ron and I were both nurtured throughout our lives by parents who cherished each other and believed in long-term loving commitment – relationships that last a lifetime,’ Jamie explains about his perspective on marriage.

Ron agrees, ‘Marriage is an important part of who we are and what we do. When we first opened the chapel, we hoped that one day – in the spirit of our nation’s promise of equality for all – we would be able to perform legal weddings for any two persons who wanted to share their lives as one. That day has now come.’ Putting on his best Austin Powers Wedding voice, Ron quips, ‘We’ve come a long way, baby!’

Back in the ’90s, Ron was a professional singer in the Folies Bergère at the Tropicana Hotel in Las Vegas. During those years, Jamie was an ice skater and dancer at other production shows on the Strip. Eventually, Ron found himself switching from tuxedo to Elvis costume during his off hours from the show. He’d travel from one chapel to another along the Las Vegas Strip, singing and performing wedding ceremonies as Elvis. Jamie, meanwhile, managed the finances and the hectic schedule.

Eventually, Ron (who had always been an entertainer) began to realise that if he owned his own chapel, he could draw on his background in show business to produce thrilling, unforgettable weddings with a much broader range of themes. As a team, Ron and Jamie wanted to produce traditional and themed weddings so enchanting that they would be like theatrical productions. They understood that couples wanted to be able to express themselves in wedding ceremonies unique to them. After purchasing a historic chapel right on Las Vegas Boulevard, Viva Las Vegas Wedding Chapel became a thriving reality.

Even with all of the outrageously fun themed wedding options, it’s still possible to book an elegant-yet-reserved traditional wedding at Viva Las Vegas Weddings. ‘We cater to everyone’s taste,’ says Ron. ‘The main thing for us is creating the most memorable wedding possible.’

The chapel lends itself to tradition, with the luxurious ambiance of an old Spanish-style mission. Yet, with a bit of showbiz magic, it can be quickly transformed to accommodate the staging for its themed weddings. Jamie adds, ‘There’s so much visual flexibility at our venue. The band The Killers even did some filming and a photo shoot here because it’s like no place else!’

Asked about some of his most memorable weddings, Ron lights up immediately. ‘I was the Elvis presiding over the wedding of Noel Gallagher (of the rock band Oasis) and Meg Mathews back in 1997. It was in all the tabloids the next day! Las Vegas is known as The Wedding Capital of the World, so we see a lot of stars and music legends here. And, of course, we see a whole lotta Elvis…’