Last December was an important milestone for same-sex couples in the UK, as we celebrated ten years since the introduction of the Civil Partnerships Act. For those who entered into a partnership as soon as it became legally recognised, the anniversary holds special resonance; who could forget how far we’ve come in campaigning for the same rights as any other married couple?

We embraced this opportunity by calling the civil partnership ‘marriage’, and we carried on the good fight towards true equality, until eight years later we could celebrate the Marriage (Same Sex Couples) Act 2013, giving us two different options to have our unions recognised in the eyes of the law.

By the end of 2006, more than 16,000 same-sex couples had entered a civil partnership, with many couples choosing to convert their civil partnerships to marriages after the subsequent law change. 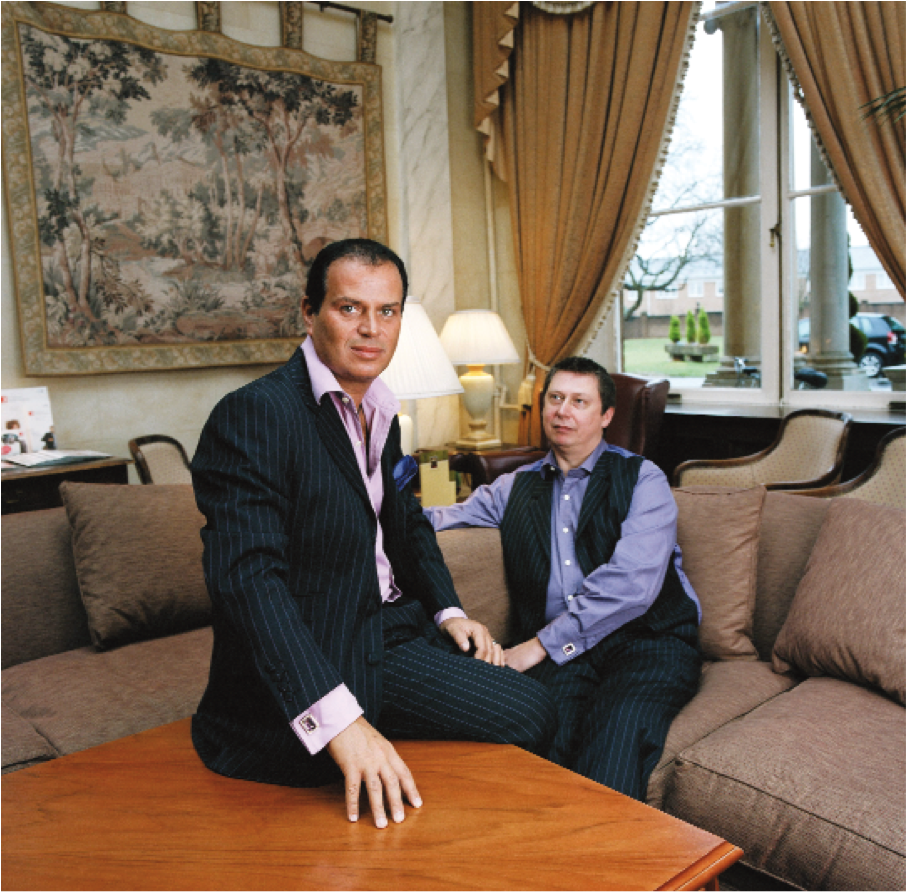 Gino Meriano, founder of PWM and the Pink Approved Group, which campaigned for equal rights and the changes in law, was himself one of the first to tie the knot with his partner Mike on 21 December 2005.

‘It’s amazing for us to look back now and realise that we were part of history,’ he says. ‘We’d campaigned so hard for a level playing field, then there we were in the middle of something so intensely personal.’

Despite the progress there’s still a long way to go, he says, with discrimination and prejudice still daily obstacles for so many couples. Gino and Mike’s campaign is still very much a growing force, fuelled by the needs of many same-sex couples who find themselves treated differently, or not offered the same options as other consumers.

Striving for equality is not about having any special signage about being gay, but about having exactly the same treatment and opportunities as anyone else, he says. Part of his campaign has become about speaking up about the need for opposite-sex couples to have the choice of a civil partnerships, as much as giving same-sex couples the full rights of married couples – about true equality, not tokenism.

From educating the public, to guiding suppliers – right from when the Gay Wedding Show started in Brighton to when it became a national event – Gino is dedicated to demonstrating and explaining that there is no place for prejudice and that equality should feed naturally into every context of life. The shows have always welcomed families and there are strong bonds with couples who are seeking to have children – all part of a culture of acceptance and genuine support that Gino hopes will filter beyond the wedding market and into wider society.

Alison and Jill Vaughan were one of the first couples to enter a civil partnership, then among the first to get married in March 2015. They recall taking part in an example wedding at Gino and Mike’s very first Gay Wedding Show, as they were planning their own celebration.

‘The wonderful wedding show was such freedom,’ says Alison. ‘We appeared worldwide on Sky Television after being filmed in the mock wedding. Later I cried my eyes out at our own civil partnership – the joy at being able to promise ourselves publicly was wonderful.’ 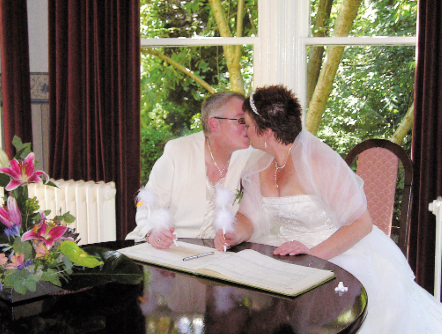 But it hasn’t all been plain sailing. ‘We’ve had our challenges over the decades,’ she recalls. ‘We’ve had discrimination galore – in both disguised and “in your face” forms, including from neighbours and people who think they have the right to judge, including hotels and employers.

‘But somehow along the way, those who don’t discriminate have always outweighed those who do. Our friends far outweigh those cruel people from the past, and we are a calm, peaceful, educational match for the challengers of the present.

‘We count ourselves lucky in living a wonderful life that’s so different to the painful upbringing we had and are proud to stand as testament to those who want to reach for their true selves and true lives.’

This year the couple are planning to celebrate their tenth wedding anniversary in style – ‘we just need to find somewhere suitably luxurious and dog friendly for our furbaby greyhounds and our family and friends, on such an auspicious occasion!’ says Alison.

On a more serious note, there is still much to be done, she says, and they ‘continue to help those “not in the know” to accept that gender identity is no barrier to love.’

Before moving to a rural village, the couple had the ‘challenge’ of living in ‘an area where youngsters were encouraged by their parents and older adults to thrown stones at our house, shout obscenities and commit other unsociable acts,’ she says, adding, ‘We worked hard to help them understand that we were human too.’

They were anxious about moving to a new area, but found their new neighbours to be far more welcoming and intelligent in their approach. After years of building a happy family life with their two ex-racer greyhounds, they contribute to village life wherever they can and have made many new friends, which ‘makes up for the awful past’.

While home life has improved beyond measure, the couple still encounters discrimination, in employment and on holidays in this country, but they are determined to counter this by ‘pushing towards ensuring that it’s truly OK to be ourselves’. The learning curve continues – when Alison went to university as a mature student it enriched both of their lives, she says: ‘I found acceptance of myself as well as by those whom I admired.’

She would be the first to say that it hasn’t all been plain sailing. ‘We’ve struggled in parts, but for every hard part there have been 50 great parts,’ says Alison. ‘We’ve both been through so much in life, fought hard and overcome obstacles; so much so, that now the small things are just that – small.

‘We are so grateful to be able to enjoy our lives in relative freedom and want all those adults following in our footsteps to experience the freedom to love the same gender, opposite gender, or indeed to transition,’ she told us. ‘There is no harm in this natural existence – after all, love is common across the world. Let’s just continue to make it safe to live in harmony.

‘We all stand on the shoulders of giants,’ she adds, ‘and in future we will be viewed as one of those giants too just by being who we are.’ 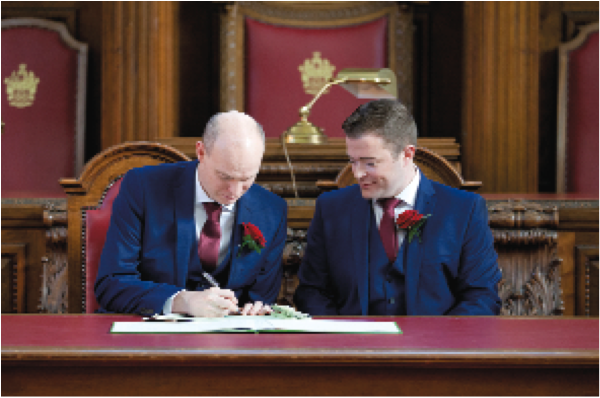 Paul and Richard were thrilled to be able to marry in 2014, shortly after the law change. They tied the knot in the Council Chamber of Islington Town Hall, which has seats in the round, ‘so all of our guests had a full view, no matter where they were sitting – which was nerve wracking for us as all eyes were on us!’

It was a close and intimate affair, with friends and family doing the readings and nieces and nephew ‘in adorable matching outfits’ as flower girls and pageboy. The drinks reception took the form of a sightseeing tour of London on an old Routemaster bus, followed by fun and feasting in the Square Pig and Pen pub, complete with a DJ and ‘rather 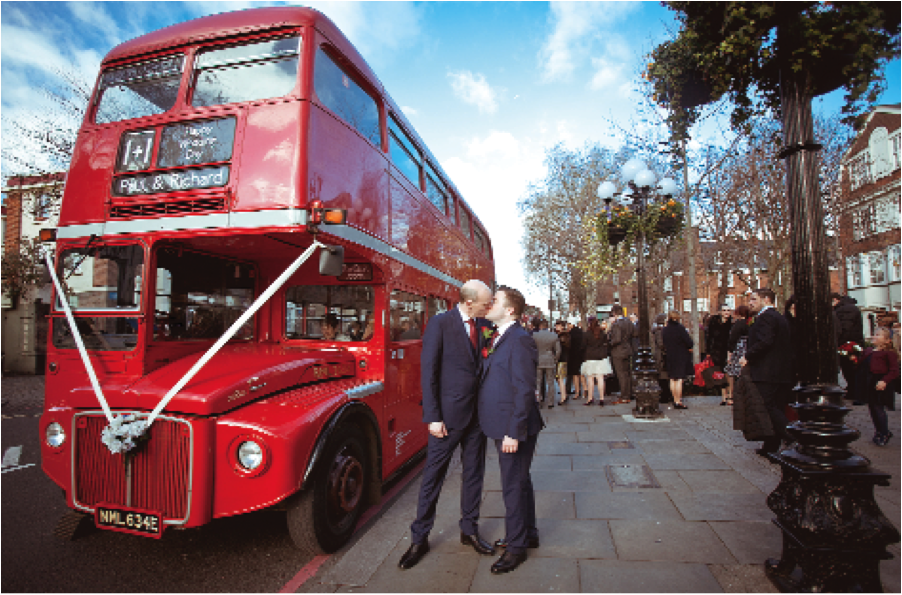 ‘It felt truly humbling to marry in the first year it became legal in England,’ they told us. ‘When we were growing up, society was far less accepting and neither of us ever imagined we would have this opportunity – civil partnerships were a great step forward. ‘It’s great to think that children born today will never know a time when it wasn’t legal to marry a same sex person.’