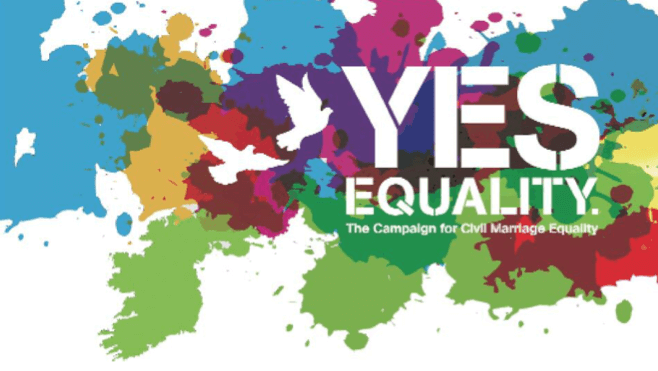 Across the Irish Sea, the Emerald Isle has finally joined the ranks of countries embracing marriage equality

On 22 May 2015, the Marriage Equality referendum was held in the Republic of Ireland. Its intention was to add an extra clause to Article 41 of the Constitution of Ireland:

Marriage may be contracted in accordance with law by two persons without distinction as to their sex.

The ‘yes’ campaign had been championing a strong fight in the months leading up to the referendum, and had the backing of many major political parties – who made the distinction that same-sex marriage was a civil matter, rather than a religious one. On the day of the referendum itself, crowds of people hit the streets to celebrate and show their support for gay marriage. Most expected the result to be a close call, as the opposing Yes and No campaigns had equally passionate supporters on both sides of the debate – but the pull towards equality was a strong one.

More than 3m people were asked to vote in the referendum, and after a majority of 62 per cent of the population voted yes, the Marriage Equality Bill was passed – meaning that same-sex marriage legislation should be made a reality later this year. This will make the Republic of Ireland the first country in the world to have legalised same-sex marriage by popular vote.

‘In the privacy of the ballot box they made a public statement,’ said Enda Kenny, Ireland’s Taoiseach. ‘With today’s yes vote we have disclosed who we are – a generous, compassionate, bold and joyful people. Yes to inclusion. Yes to generosity. Yes to love, and yes to equal marriage.’

Same-sex marriage has come after a long-fought battle for equality in Ireland. A Civil Partnership Act was introduced in 2010, and came into force on 1 January 2011 – although discussion of legislation to recognise unmarried partnerships dated back to 2004. Civil partnerships were a step in the right direction, but there were still a number of inequalities that gay couples were subjected to, such as some parental rights, as well as social benefits and welfare. With such a traditionally conservative country taking a step towards equal rights, the yes vote in Ireland was a proud statement that the freedom to marry the person you love should be a basic human right – and will hopefully fire up the debate in countries across the globe that are yet to embrace marriage equality.