We have come a long way since it was acceptable to display signs outside a premises stating ‘no Irish, no blacks, no dogs’, and I have direct experience from the bad old days where clients of mine had been refused legal advice from solicitors because they were gay.

The Equality Act 2010 makes it illegal to discriminate against a person based on a number of characteristics, including race, sexual orientation and gender reassignment. Nevertheless, certain businesses – including some religious owners of hotels, bed and breakfast accommodation and bakeries – would seemingly like very much to be able to exclude same-sex couples from availing themselves of at least some of their services, whether this is a double bed or a wedding cake. The honest approach for such businesses would be to display a sign saying ‘heterosexuals only’ – but they are not allowed to.

Among other things, the Equality Act 2006 set up the Equality and Human Rights Commission to give advice and guidance about one’s rights and responsibilities under discrimination law. The Equality Act 2010 consolidated existing equality legislation, which had originated during the last century to deal with race and sex discrimination. It also absorbed EU legislation, which had led to the UK introducing a regulation that prohibited businesses from discriminating against customers based in their sexual orientation.

In 2009, a case was brought by the Equality and Human Rights Commission against Mr and Mrs Bull, the hoteliers who refused to allow a same-sex couple, Steven Preddy and Martyn Hall – who were in a civil partnership – from sharing a double bed. The reason for this was that the Bulls’ religious beliefs were such that they would only let heterosexual married couples share a bed in their hotel. The ultimate decision of the Supreme Court was that the Preddy-Halls were the victims of discrimination. The Court held that the Bulls’ right to practise their religion was not a sufficient reason to permit them to discriminate against the couple.

There have been a number of other cases where the rights of the LGBT customers have clashed with those seeking to discriminate against them due to religious beliefs, and these cases tend to attract media attention. The current line is that religious beliefs, however firmly held, are not a sufficient reason to discriminate against LGBT customers. However this is line that some are seeking to re-draw. The Religious Freedom Restoration Act in Indiana is an attempt by the legislature there to bolster the rights of the religious, and is widely seen as an attempt to permit legal discrimination against LGBT customers. 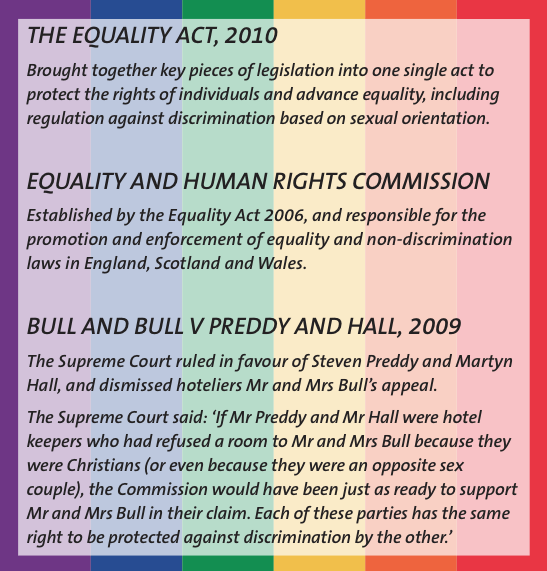 There is the current case in Northern Ireland involving a bakery that has refused to bake a cake decorated with the slogan ‘Support Gay Marriage’ because the bakers quite clearly do not support gay marriage. At the time of writing, judgment has been reserved but, whatever the outcome, there is likely to be an appeal.

So what can you do if you are a victim of discrimination based on sexuality? The Equality Act 2010 permits a claim to be made for damages in the civil courts. It is not a crime that should involve the police. There is a standard form of questionnaire, which should be completed and sent to the offending business. This may resolve the matter or lead to mediation. If the
case cannot be settled then the complaint should issue an application to the court. This would enable the court to make an award in damages if the discrimination were found.

Obviously, one would prefer at the outset to patronise businesses that support equality, LGBT customers and so on. There is enough to do when getting married without having litigation to deal with as well – and the outfits are not likely to be suitable for both occasions. But if you do find yourself on the receiving end of such conduct, then the Equality and Human Rights Commission is your friend and the following link is your starting point: www.gov.uk/equality-act-2010-guidance
Daniel Williamson is a Partner at David Clark & Co Solicitors