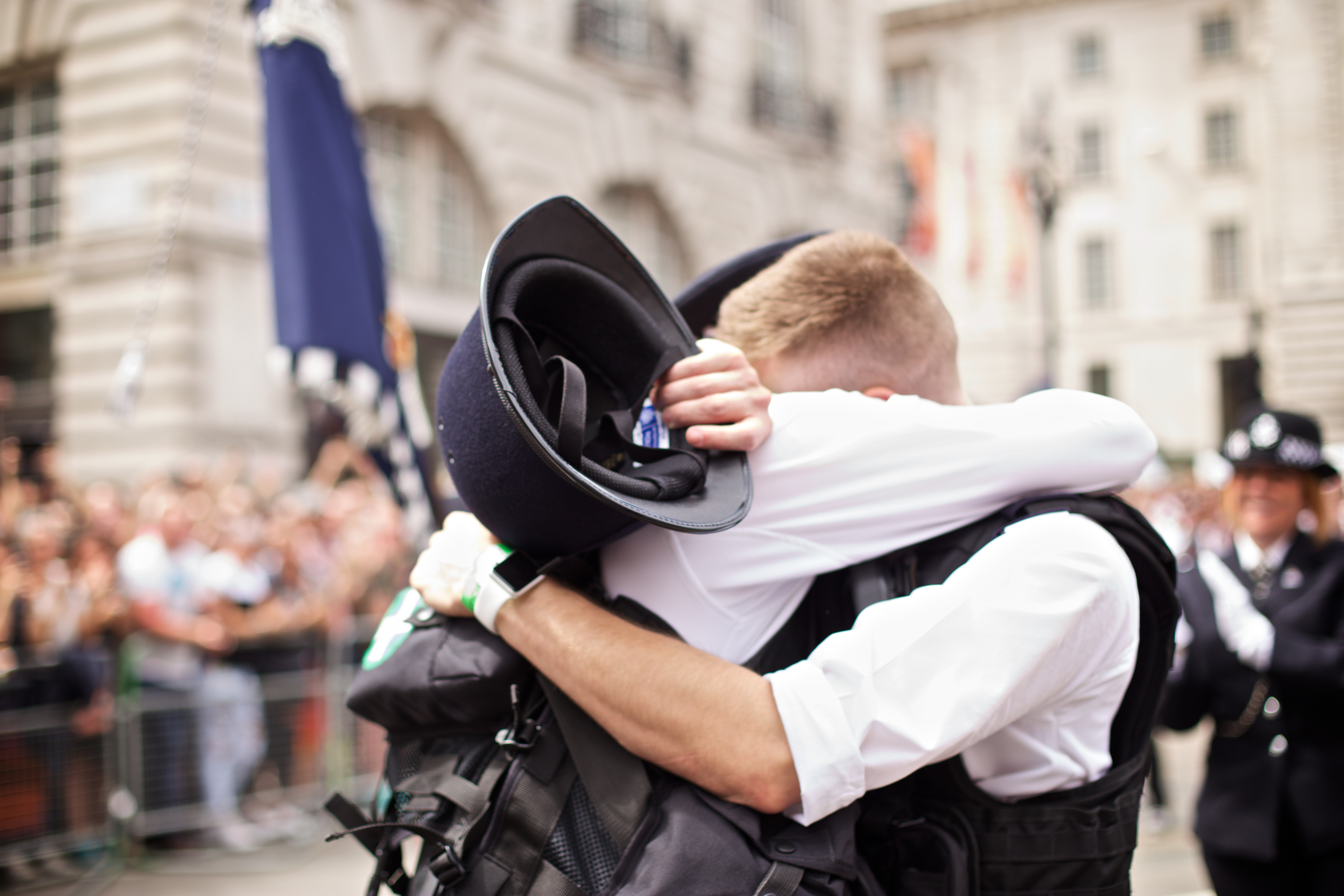 When Sam, a policeman at London Pride went down on one knee to propose to his boyfriend and colleague Martin, it was a traffic-stopping moment. Martin shares a special moment – of professional equality as well as personal joy

We first met on social media, as many people do these days. Initially we got together for a beer at a place local to me, not expecting anything to happen. Little did we know, when we first started talking, that we had the same job. We got rather merry that night and got on so well we have not really spent a night apart since, unless we’ve had to for work commitments.

So, onto the day that Sam proposed. Well I found out afterwards that it had all been planned, with the senior officers in the parade knowing about it a week or so before. In fact Sam had only actually decided he was going to ask the big question at that point!

On the day of the parade I found out I was in a vehicle towards the rear of the contingent and Sam was up at the front. During the parade there was a proposal from a colleague to his boyfriend in the crowd. It was amazing to see, and made me very proud to work for the Police.

The parade continued. I’d pushed Sam to take part in it this year. He had only come out in October last year and had a real hard time coming to terms with being gay growing up, so it was a huge step for him to have told his friends, family and colleagues.

During the parade my colleagues came to a halt near Piccadilly Circus. A colleague came limping over to my carrier with a sergeant and I was asked to swap with her to march as she was injured. (She was in fact just acting, I later learned!) I knew my mother and best friend were going to watch us in the parade here anyway, so it was a perfect time to go to them at the barrier and say hello.

I felt a tap on my shoulder and Sam said to me, ‘See I told you I’d get you up to the front.’ At this point he got down on one knee and I immediately realised what was happening. Everyone started screaming and cheering in the crowd and Sam popped the question.

It’s a little bit of a blur for me at this point. I had no idea this was going to happen, but of course I said yes. He had a temporary ring at the time, as the one he had ordered was still being made. The parade then continued to the end and I was emotional for the rest of the march, holding back tears of joy.

The response has been amazing and the video of it happening went worldwide. I think it was particularly important that there was some positive LGBT news in the USA after the tragic events at Pulse Nightclub, Orlando.

Gay marriage is only a recent thing in the UK and still a struggle across the world. I think the UK tends to lead in diversity and equality and we are both very lucky to live here. I think it is also important to show the Police in a personal light and it demonstrated to the world how amazing the Metropolitan Police are in London at supporting their staff, no matter their background.

I honestly have never been treated any differently for my sexuality and have always been judged on merit and my work ethic. They have always also supported my work within the LGBT community.

I’m only 28, however I came out when I was 14. Times were different then in terms of meeting other gay guys and the internet and social media were nothing like they are now. I knew little of the community I was becoming part of.

From a policing point of view, I hope the media interest in will increase confidence in the LGBT community in us as a service – particularly with regards to LGBT domestic violence and hate crime, which are important to report. Domestic violence can be very hard for someone to talk about in the first place, let alone if they’re from a minority.

So… to the date. We have no idea yet, but definitely within the next two years. Both of our best men have been told of their appointment, and we are finding out just how expensive weddings can be, so are starting to save hard. Obviously our mothers are going to play a big part in the organisation of the celebration, but we all are yet to find time to sit down together because of hectic work schedules. Exciting times are ahead!

Photography by Horta do Rosario, www.hphotography.net